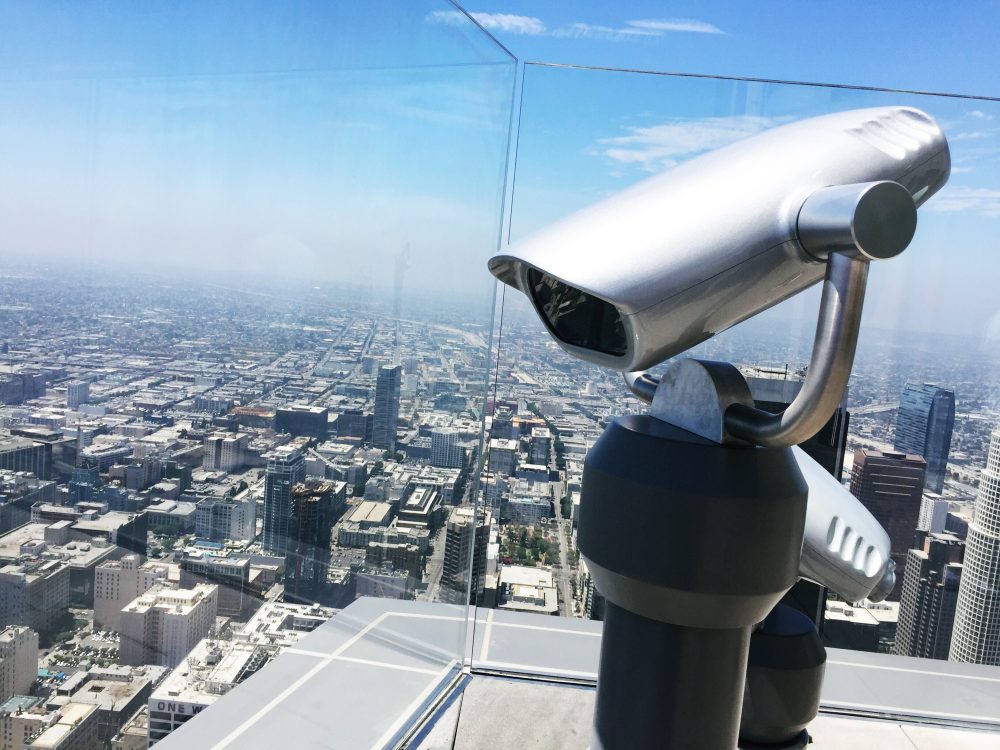 I’ve always been a sucker for a good slippery dip (or slide, depending on your terminology).

Going on the giant yellow slide at school fetes was something I could never pass up; always feeling a little bit giddy when it would sway in the breeze as I marched up the stairs, hessian bag in hand.

And even now I still remember the old metal slides at Beenleigh BMX park that would heat up in the summer sunshine and burn the back of your legs, causing you to try to slide while lifting your legs in the air (I mean, seriously, a hot metal slide for children, whose great idea was that?)

As you can imagine, I was pretty darn excited when I discovered that LA’s newest thrill ride–Skyslide–would be open in time for my visit earlier this month.

Built on the side of a really bloody tall skyscraper (72 stories), there’s no denying that Skyslide at OUE Skyspace LA is taking thrill seekers to new heights–a height of almost 1000 feet, or 300 metres, to be exact.

Since 1989, the U.S. Bank Tower in Downtown LA has held the title of tallest skyscraper west of Chicago but it’s the new feature–the one-of-a-kind glass enclosed Skyslide–which has everyone talking (and one lady already suing).

The 45-foot-long slide is approximately 4 feet wide and made entirely with 1-1/4 inches thick glass–so you can really take in the view.

Forget glass slippers, I want a glass slide to take me from my apartment straight to Sixes and Sevens on James Street!

If you’re scared of heights, this isn’t the attraction for you, but if you’re just a little unsure, take a deep breath and give it a go because it really is over in just seconds and no one I saw regretted giving it a go–even those who took a few extra minutes to push off.

If the slide is not for you, OUE Skyspace LA is still worth a visit–on a clear day–because it offers breathtaking, 360-degree views of Los Angeles.

There’s also a Digital Interactive Level with a panoramic Digital Topography Wall of Los Angeles which has information on landmarks, neighbourhoods, and other points of interest; an infinity mirror that creates reflections upon reflections and a silhouette wall which uses pixels to create reflective images based on body movement.

But the view wins hands down.

It was a little foggy the day I was there but I could still make out the Hollywood sign in the distance and it was amazing to get a bird’s-eye view over the city of Angels.

OUE Skyspace LA is located on the 69th and 70th floors of the U.S Bank Building in Downtown Los Angeles. 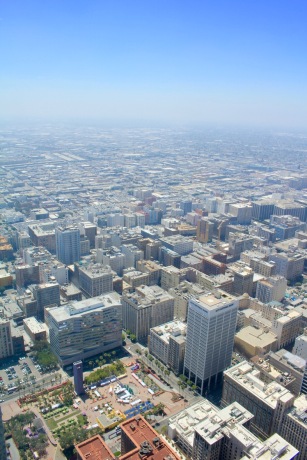 My $33 US ($44 AUD) included access to all four levels of Skyspace LA including the two observation decks on the 70th and 69th floors and one ride on the Skyslide.

Unfortunately I wasn’t allowed to film my slide (or my epic dismount) so here’s the next best thing:

Unlike the giant slide of school fetes, I probably wouldn’t race up to do Skyslide again, but I’m glad to say I’ve ticked it off my bucket list!