The days of black market liquor sales might be over, but mark my words, moonshine—a sweet, corn-based liquor that will light a fire in your belly and warm you all the way to your toes—is making a comeback.

I had my first taste of moonshine as part of my Get Up and Ride bike tour in Brooklyn when we stopped at the city’s oldest operating whiskey distillery, Kings County Distillery, for a tasting and it was much smoother than I expected.

Now, Brisbanites are able to get their fix of moonshine with the opening of GreenHill Bar in the Caxton St precinct on Petrie Terrace.

Following the opening of Boggo Road Gaol, GreenHill was transformed into police barracks and then redeveloped in 2008 to become The Barracks entertainment precinct.

But the best news – they’ll be serving up a retro-styled “Jaffle special” each week (yep, the old triangle type of jaffle). Last week’s special was dubbed “Yesterday’s Spaghetti Bolognaise”. Yum!

And while the menu will leave your mouth-watering, it’s the carefully curated cocktail list that will truly tantalise the taste buds because each GreenHill signature cocktail is made with moonshine.

My picks include the Bootlegger Lemonade made with Melbourne Moonshine Sour Mash and house southern smoky lemonade, the Moonshine Fizz, “a Southern garden party in a glass” and The Jacked Rose which promises to “get you all shook up”.

It’s fair to say, this industrial-themed bar with its exposed brick and distressed wood walls, polished concrete floors and sleek blue leather booths is set to become one of the most wanted places to be this summer in Brisbane. 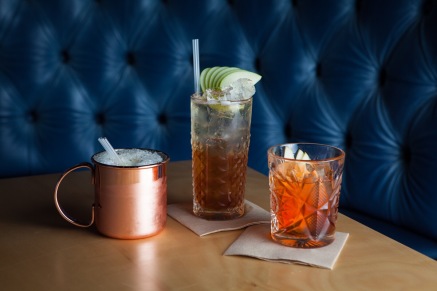 Find GreenHill Bar at 48 Petrie Terrace, Brisbane (the white building next to Harry’s).