It’s not easy being green

There are a number of sentences that can quickly conjure up a sense of fear and panic in people.

For me, the first is when my mum uses my full name.

It almost always means I’m in trouble. Although it’s been a few years since it was last used … after I secretly increased my credit card limit while living overseas and receiving financial aid from my parents. Whoops.

The second—and the most commonly feared—is ‘we need to talk’.

Really? Must we? Can we not just stop trading text messages and in three years’ time, I’ll wonder what happened to you and if we are technically still dating because we never actually broke up?

Now, I have a new sentence to be afraid of and it’s about to become a semi-regular part of my life.

‘Next we’ll do a body composition assessment.’

The only thing that stopped me from running straight out of the gym door was that I was still in shock from being weighed … while wearing my jeans!

Every woman knows the only time to be weighed (if you can help it) is the first thing in the morning. Naked. After you’ve been to the bathroom (I’m just saying what everyone already knows!).

But that wasn’t the worst part.

Having survived the weigh-in with what I thought was a fairly good result, I was then delivered a surprising blow. 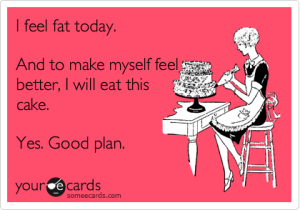 From what I can gather my body is composed of: 15 per cent chocolate, 10 per cent cookies and 5 per cent ice cream.

There’s also 60 per cent wit, charm and humour and the last 10 per cent is the ‘other stuff’ like skin, muscles and my brain!

Having found a way to sugar coat the bad news for myself and been briefed on the long-term health implications of carrying a little extra well-disguised weight around my middle,  I set about planning a new ‘clean’ healthy eating plan.

(Don’t get me wrong, I’m not looking to ditch all my ‘fat’ … after all, a good portion of it is essential, I’m just interested to see if I can muster up the willpower needed to kick my sugar addiction and if I manage to come out looking like a Victoria’s Secret model, you’ll know I’ve had a lot of plastic surgery!)

However, trying to wrap my head around acidic vs alkaline foods wasn’t easy; it took four desserts (three servings of ice-cream and one raspberry and white chocolate mousse), a half rack of pork ribs and chips, a Turkish pizza, a Chicken Caesar Salad and some sushi to deal with the pain.

But come Monday morning, I was ready to put my plan into action with some early morning exercise followed by a banana, protein powder and spinach smoothie for breakfast.

It was so delicious  banana-y.

Which seems fairly self-explanatory except that I don’t like bananas. Unless they’re baked in cakes or bread, which could have more to do with the sugar that accompanies them rather than the fruit itself. 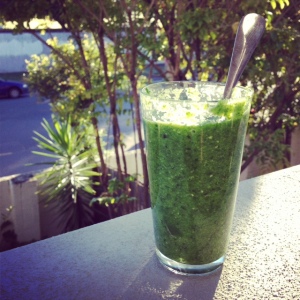 As part of some bizarre form I punishment, I also ended up in a conversation with my mum on Monday night that went something like this:

Me: I love donuts.
Mum: I love sausage rolls and vanilla slice and lemon meringue pie.
Me: I love McDonald’s fries and thick shakes.

Because for some ridiculous reason, as soon as I’ve decided to go on some kind of health kick, I start thinking about every bad food I love and wishing I’d eaten it before I started eating properly!

Thankfully, I managed to avoid a late night run to Maccas and instead settled on cleaning my teeth. Twice.

This morning—with the banana smoothie crossed off the list—I decided to start the day with a green juice concoction (pictured above) recommended by James Duigan—the man responsible for Elle MacPherson’s banging bod.

Having performed a near maniacal run around the fruit and vege section at Woolies to replenish my supplies purchase for the first time some spinach, celery, lettuce, mint, parsley, lemons and ginger, I was ready to shake things up.

I hit the kitchen clad in more lycra than is flattering, pony tail bouncing. I felt invigorated.

I felt like a contender on Australia’s Next Top Model and as I whizzed the ingredients around in my blender, I began mentally filling my wardrobe with new clothes to show off what will be my hot new figure, shiny hair, sparkling eyes and clear skin.

Then I tasted it. And my face screwed up in much the same way as it did when I was force-fed Haggis as a 14-year-old.

As one of my friends kindly pointed out upon seeing a picture of my smoothie—it was like drinking a glass of freshly mowed grass.

Now I know what Kermit meant when he said, ‘It’s not easy being green’; it had nothing to do with his skin tone and everything to do with the pain of eating a clean, lean and green diet of preservative-free insects!