When it comes to Segways, most people know one of two things; that President George Bush—dressed in tennis gear and clutching his racquet— fell off one in 2003 when taking it for a test ride or that the owner of the company, James Heselden, drove one off a cliff to his death.

But the Segway shouldn’t be judged by the idiots (can I call a former President an idiot?) who have driven them poorly, because they are the newest way to cruise around the city and good fun to boot!

Last week, with the sun shining high over Brisbane, my cousins—brothers Craig and JP, and 13-year-old Maddy—joined me at Riverlife Brisbane to test ride the Segway through Brisbane.

For those who are uninitiated to the Segway, it’s a two-wheeled, self-balancing, battery-powered electric vehicle (try saying that after a few beers) which was legalised for riding on Queensland footpaths in July.

Not only was Queensland the first to legalise the two-wheelers, but our boys and girls in blue are now trialling Segways as part of their crime-fighting arsenal. Forget being the ‘smart state’, we’re the Segway state!

Launched in 2001 on Good Morning America, the Segway was tipped to revolutionise global personal transport… while that hasn’t quite happened they are a popular mode of transport for tourists in hotspots across the world including Barcelona, San Francisco, Munich, Prague and Zambia—replacing the conventional walking tour in many locations.

It probably doesn’t help that they cost between $7000 and $12,000 a pop, although being powered electrically does mean they’re more eco-friendly than cars or motorbikes.

Riverlife Brisbane launched their fleet of 15 Segways at midnight on July 31 and since then, the 25 minute Segway Obstacle Course ($39), which runs multiple times a day and is suitable for riders as young as eight years old, is their most popular Segway-based attraction. The 60 minute tour is most popular with tourists who want to get a taste of our beautiful city.

Keen to get the most of our experience, we chose the 60 minute Segway Tour ($99), which normally goes from Kangaroo Point to South Bank, over the pedestrian footbridge through the Botanical Gardens to Edward Street and back, but we also took a few extra rolls around the obstacle course to get our bearings.

As all tours start with a 10 minute training session on the obstacle course, our instructor Jameson put us through our paces, teaching us how to manoeuvre the two-wheeled beast over speed bumps and around witches hats.

It only took a minute or two to get the hang of how the Segway works; lean your weight forward on the platform to go forward and lean backwards to go in reverse. The Segway detects, as it balances, the change in its centre of mass and establishes and then maintains a corresponding speed, forward or backward. To turn, just pull the handlebar to the left or the right.

It was like gliding on air. While wearing high vis and a helmet.

Due to the high level of competitiveness that runs through our family (did someone say Monopoly?), it was no surprise that insults were flying and we soon found ourselves racing around the obstacle course in a time trial that was won by JP … but only because his Segway was set to a faster base speed than everyone else’s!

It sounds simple … and it pretty much was until Maddy learnt the hard way that a slight bump to the wheel can quickly throw you off balance and land your Segway on top of you. (The wide wheels which are handy for going off-road mean the Segway is almost a metre in width requiring riders to be constantly aware of how close they are riding to obstacles!)

But after a quick ice-break and with a bump and a scratch to show for her troubles, Maddy was back on two-wheels and ready to hit the open road.

With 30 minutes left of our session, Jameson decided to take us for a whirl down around Kangaroo Point—he even turned up the speed on our Segways so we could zoom along a little faster, although not so fast as to exceed the 12km/h speed limit. 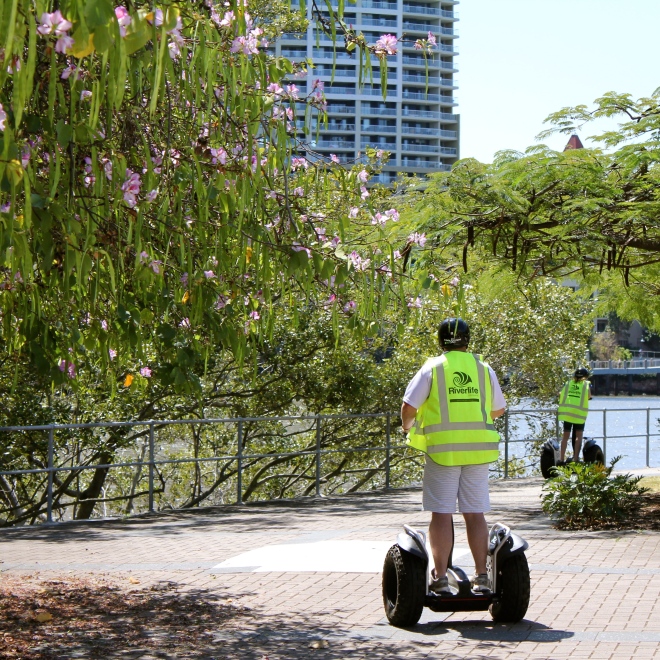 It was a perfect day to cruise along the river and as much as I love my old-school bicycle, riding the Segway was some of the most fun I’ve had on two wheels.

Despite the outstanding weather, we didn’t encounter packed pavements or too many pedestrians to negotiate around, most simply stepped out of the way and smiled as we went past.

We zoomed along footpaths, under trees and over grass, taking in the spectacular city view, before going off-road in to the park underneath the Story Bridge, testing out the twisting capabilities of the wheels.

After a quick stop for photos, we headed back to Riverlife headquarters at the base of the Kangaroo Point cliffs.

Once we’d returned our high vis and helmets, there were two things left to do; hike up the (killer) Kangaroo Point stairs and then indulge in a family lunch at The Cliffs Cafe at the top.

All in all, the Segway tour was a brilliant way to spend a couple of hours by the water and is highly recommended by the four of us; Craig thought it was lots of fun for a family (as well as a surprising workout for the calves) while JP thought it would make a great activity for a date (awesome idea, fellas!), rating it high above coffee or putt putt.

Even Maddy loved the experience (bumps and bruises included) and would have another go at it with her friends if given the chance.

And I, of course, would highly recommend it … it’s a wheelie good time (awesome pun that!) and a great way to see more of what Brisbane has to offer.

Thanks to the crew at Riverlife for helping me cross another item off my bucket list!