When I was a kid, there was one main thing that separated birthday parties from everyday life—chocolate crackles.

According to the Australian Food History timeline, the earliest Chocolate Crackles recipe was printed in an advertisement in the Australian Women’s Weekly on 18 December 1937.

It was placed by Edible Oil Industries, a subsidiary of Unilever, who made Copha. While the advertisement mentioned Rice Bubbles, it did not include the Kellogg name. 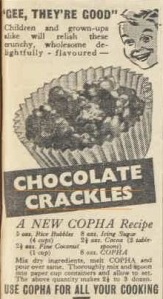 But with rising levels of childhood obesity prompting a swing toward a healthier outlook (and because Copha is hydrogenated coconut oil and therefore somewhat bad for you), the humble chocolate crackle is now in danger of disappearing*.

But fear not … here is a healthy version of the chocolate crackle created by blogger Natural New Age Mum, which is gluten-free, vegan, dairy-free and egg-free but still big on flavour.

My friend Nelly whipped a bunch of these up for her daughter Pippy-Mae’s first birthday on the weekend and they were gone before you could say ‘pass me another!’

Method:
1. If you are using shredded coconut, blitz it in the food processor for a few seconds until it is in fine pieces.
2. Combine coconut oil, cocoa, sugar and coconut and melt in a saucepan.
3. Pour the melted chocolate mix over the rice puffs in a bowl and mix with a large spoon.
4. Put 12 paper patty cases into a muffin tin and gently spoon the mixture into each one.
5. Pop in the fridge until they go hard (it doesn’t take too long!).

For the Thermomix version of this recipe, click here.

Read more plus tips on how to tackle childhood obesity here.